Ms vs. the Map 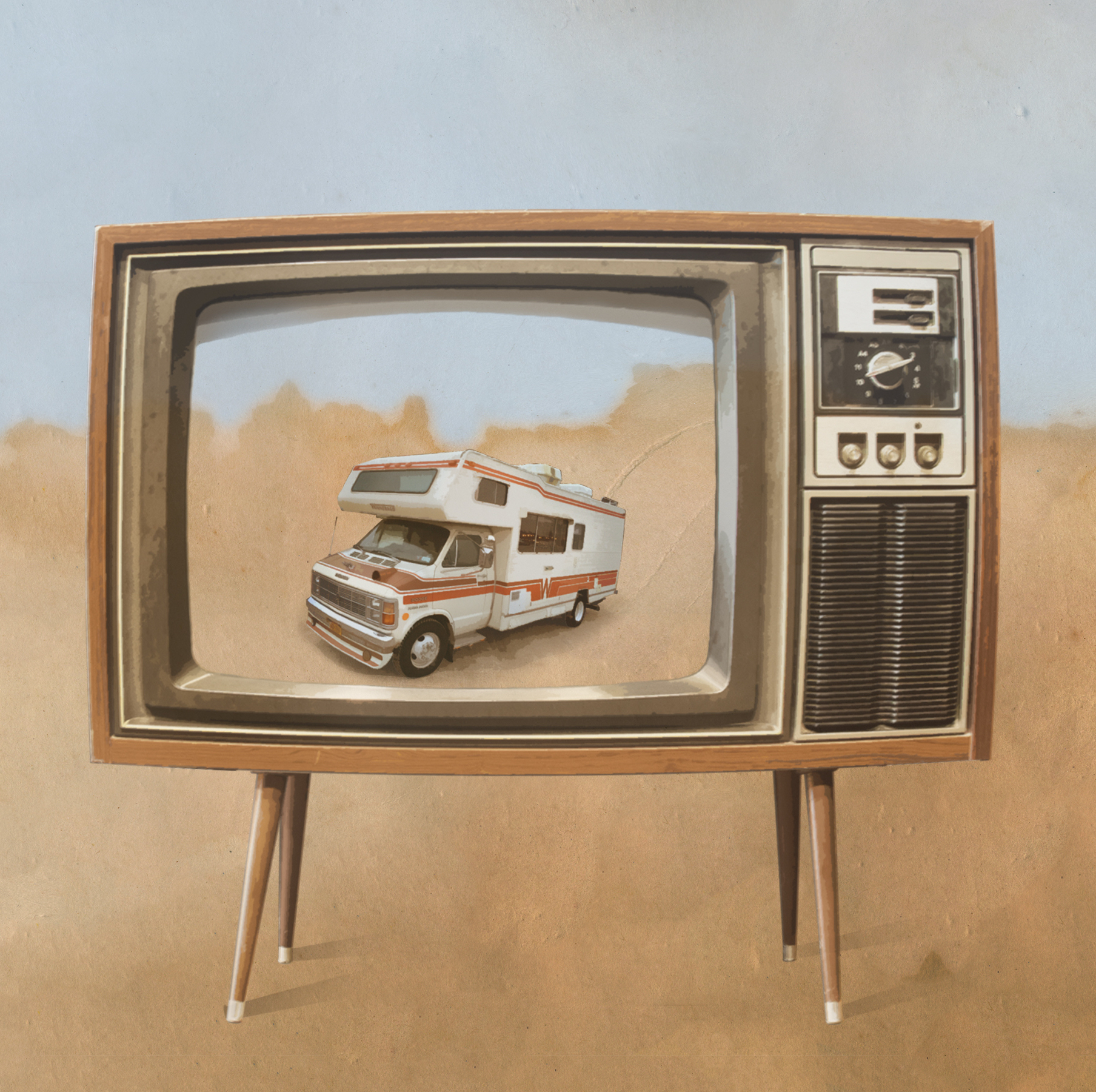 Why Quitting Your Job and Road Tripping through

America Might Be the Most Patriotic Thing You Can Do

The rain is pouring down like I’m under a damn waterfall and it feels like all the wind in the world has come together in conspiracy. The broad sides of my vehicle act like sails and I’m hurled erratically into parallel lanes. As I jerk the wheel to avoid sideswiping my neighbors on the road, their honking is barely audible over the noise of it all.

I try to ignore the faint sound of my exhaust pipe dragging behind me, clinking like tin cans after a shabby marriage. The diesel engine rumbles roughly, providing unsteady power, and my windshield wipers have failed entirely, leaving me to approximate where to go on a dark and unfamiliar highway in Connecticut. I’m freezing. I’m soaked from the rain and a hole somewhere under the instrument panel is letting seventy-mile-an-hour winds assault me. My stomach is tight. Steam pours from the engine and fog obliterates any remaining chance at safety. But I have a ferry to make.

The pedal is pinned the floor and I’m rocking in my seat as if to transfer just a little more energy into my forward progress. If I miss this ferry, I’ll have to drive through all of Connecticut, the Bronx, cross the Throggs Neck Bridge and Queens before I’m home to Long Island safe and sound.

Earlier, I had driven five hours to Cape Cod to look at this vehicle. It’s a 1979 Winnebago built on a Dodge chassis. That’s about all I knew about it when I handed some guy 3,500 bucks an hour earlier. Now I’m on the bleary reverse journey, unsure if I’d just made quite an expensive mistake.

I’m trying to separate my senses, to find a measure of coherence in my surroundings. There are smells that warn of leaking fluids, sounds of an aching engine and nothing feels right. I look into the rearview mirror and see the long corridor of my new home away from home: antique wood paneling and tweed cushions, hinged cupboards that have come loose and are swinging disjointedly.

My eyes fall on the toilet in the extreme rear, and a new sound can be heard. It’s coming from me. Down from my belly, a roar has choked its way up my chest and collected in my throat. Any attempt to stifle it would be futile, so I give it full rein. It is the wild laughter of the insane, coughing up in uncontrollable percussion. I catch my reflection, wide-eyed and manic, in the rearview mirror and my release redoubles. It is minutes before I regain my composure.

As I drift into another lane, I’m interrupted by the wail of a semi-truck’s air horn. “Oh shut up,” I shout above all the other noises. “Jealous motherfucker.”

Four months and 7,000 miles later, I am standing outside the Winnebago shouting profanity into the endless desert, the New Mexican sun frying the skin on my shoulders like a tortilla chip. With nothing but flat sand and low brush to bounce off, my shouts are swallowed by the landscape and my frustration dies echoless. I swing back around and hurl a heavy boot into the bumper. This is not the first time I’ve broken down. This is not the fifth time.

Although I’d spent weeks addressing all the obvious issues before deeming the vehicle roadworthy, mechanical problems small and large had plagued my progress since the moment I’d left New York. Within 18 hours of departing, a frozen January night killed my ignition battery– a routine repair. Ten days later, my transmission blew up on a highway in Tennessee – slightly more complicated.

All throughout the South, fuel leaks and electrical problems had become commonplace. Somewhere in Texas, the entire back section of the Winnebago began falling off. If you looked at the side of the vehicle, the sad sag of the rear quarter made it look like a condemned building in a forgotten part of town. I looped some rope around it and tied the knottiest of knots. It worked, more or less.

For all the vehicle’s flaws, though, I am still in love. My shouting into the desert is nothing more than a routine argument, a small disagreement the likes of which pester even the most stable relationships. Although the Winnebago’s suicidal tendencies have undermined my desire for carefree wandering, I’ve been able to satisfy another, larger goal: to finally become acquainted with the country I call my home.

Three decades spent in suburbia had isolated me from America. At 30-years-old, I knew no more of this place than what I’d learned from evenings spent in front of a blue screen in my living room. I’d seen two-dimensional images of canyons and great plains, ancient forests and rivers, but it was all hearsay. Until Isee them for myself, I thought, I can’t be sure they’re even there.

I felt the same about the people. I’d heard every well-rehearsed accent in the canon of American Western cinema, could mimic the way Clint Eastwood spit his words, how John Wayne slurred his. I copied and pasted a broad, outdated valley-girl accent on anyone from the West Coast. I could read a map of my country, recite the state capitals and outline our military history, but I couldn’t tell you how giant the Giant Redwoods are. I had no idea what the desert smells like.

Americans, by and large, only see America through the filter of our media. We don’t acquaint ourselves with its inner workings because they are largely inaccessible. We don’t have the time to travel and there are no bullet-trains to the desert. Our TV-familiarity with this place has become something of a common currency; we all just assume it must be true. There are few discrepancies since we’ve all seen the same movies. But so have most Europeans.

Since leaving home, though, I’d steadily begun to replace my half-formed, pre-packaged idea of America with the genuine article. A thousand strangers’ stories collected along the way merged together to form a single national voice, and, with each passing week, the hazy images in my mind became more focused, the blurred boundaries separating the interiors states more sharp.

If you look at the spaces between cities on a map, you assume they’re essentially empty; brown means mountains, green means forest and so on. But for every millimeter of unaccounted land, for every seemingly barren stretch of highway, there’s someone who lives there, or near there, who can tell you its history for as far back as they can remember. And if you’re willing to go find the these people, chances are they’d be happy to speak with you.

Breaking down outside an impossibly small town in New Mexico was a routine mess, an unplanned-for stop in a place I’d never intended to visit. Yet it, like scores of other instances along the way, was somehow balanced. The stress of not knowing if the Winnebago were finally dead, whether I could even afford to get back to New York if it were, or where I’d sleep in the meantime was offset by what I’d found along the way: cultural identity. I feel so much more American today for having seeing so much of America.

It wasn’t easy to muster up the nerve to begin the voyage, but it was easier each day after taking that first step: recklessly purchasing the vehicle. After that, one domino slammed into the next until, one cold January afternoon, I took a breath and pointed myself at the parts of the map I’d never known even had names.