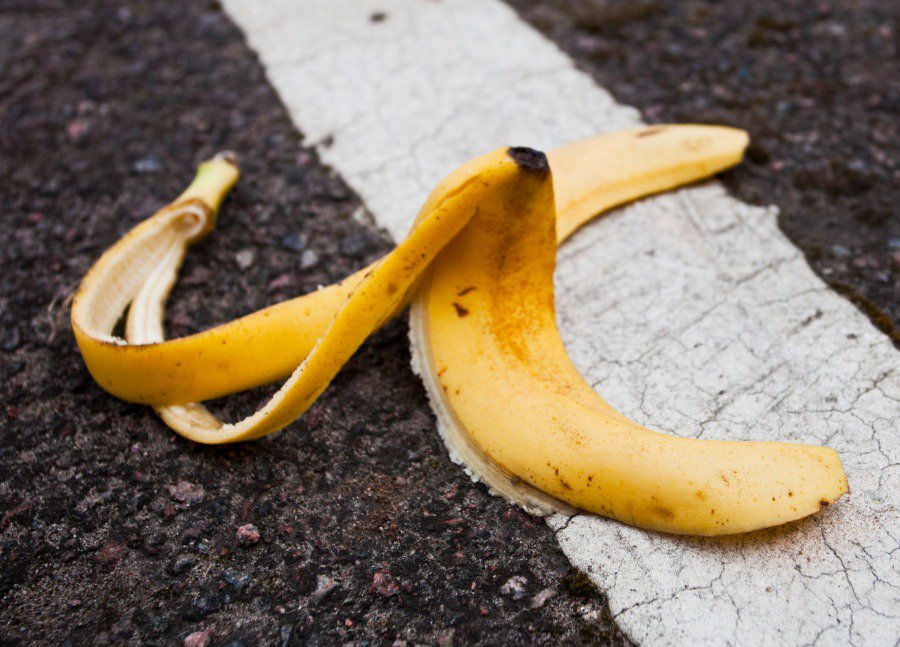 Last summer, I had one of the strangest conversations of my life. I was riding my motorcycle past the beach in my pristine Long Island village when the man driving the car in front of me tossed something from his window. I’m not usually an aggressive guy, but certain things boil my blood instantaneously.

I blasted the gas and came careening along side of him shouting “don’t fucking litter in my town!” loud enough to be heard above the noise of both our vehicles. Startled, the other driver jerked the wheel in my direction and we both jammed on the breaks until we came to a full stop. He looked terrible. His unkempt hair, five-day beard and bloodshot eyes would have been menacing enough, but the way he screwed his face into a snarl was absolutely evil.

“It was a fucking organic banana peel, you fuck!” He looked like he was reaching for his door handle.

I took off my helmet, laid it in my lap, kicked the kickstand down and just watched him, grinding my teeth into powder. A few very long seconds passed as we stared each other down. I was still furious, but I knew I’d been beaten, so I took a slow, deep breath and apologized. “I just really hate to see people throw trash on the ground,” I added. “Especially in my hometown.”

Despite the awkward beginning, we ended up having a brief, but nice chat. He told me that he couldn’t stand littering either and that he’d be the last person to throw garbage in the street. He even thanked me for being so assertive. “We need more people like you.”

“You too, buddy.” So we both left smiling.

Thus began my fascination with the personal politics of littering- why some people do it and some do not. As you might imagine, when I started looking into it, a blurred line is the best I found. It’s a big, big world out there, and the definition of litter varies not just between states and countries, but between individuals. What I consider to be alright to throw on the ground might be an atrocity to someone else.

As far as the banana peel incident is concerned, the man I confronted was technically in the wrong. At least in the United States, it’s generally illegal to throw anything from the window of a moving vehicle. Certain exceptions apply, though, as in California where they allow for clean water and, strangely enough, feathers from live birds to spill onto the highway. Unfortunately, that means mobile pillow fights still constitute as littering.

Generally, though, even throwing biodegradable material in the street is forbidden. These laws weren’t established for conservation purposes, but to maintain the health and safety of the national highway system. The idea is that throwing a banana peel to the curb can attract bugs, bugs attract small predators, smaller predators attract larger ones, and a grizzly bear on the highway can cause problems. It’s understandable.

That said, most people feel similarly: as long as you throw your banana peel somewhere secluded and no one sees you do it, you’re good. There’s even a smidgen
of science that reinforces this behavior. Studies show that both the presence of litter around you as well as witnessing other people littering increases the likelihood that you will litter. So littering secretly, despite still being reprehensible, would be better than littering overtly.

This kind of simple psychology has played a large part in the battle for cleaners public spaces. Since most people don’t spend a great deal of mental energy on what to do with their trash, nudging them into responsible behavior has been the goal of many municipalities.

Studies suggests that merely providing visible garbage cans significantly reduces littering in nearby areas. If garbage cans are too costly, the presence of a basic sign alone (e.g. “Please Don’t Litter”) can prove to be an effective deterrent.

The majority of litterers don’t want to litter, they just don’t care enough find a responsible alternative, which is why “transfer points” like bus stops or storefronts, are some of the most highly polluted areas. Many people would rather leave their trash on the ground than carry it with them throughout their day. The Victorian Litter Action Alliance (VLAA), an Australian anti-pollution think-tank, classifies four types of litterers:

Most people will go to great lengths to avoid being reprimanded by strangers for throwing trash on the ground, so very few fall into the “anti-establishment”
category. Rather, convenience and anonymity are the two most common factors toenticing littering, which explains why our roadways are often lined with trash. The anonymous nature of driving on the highway provides a buffer between you and what researchers call “negative social consequences”.

That is, unless a hungover maniac with a penchant for social conflict happens to be riding his motorcycle behind you. Then, you’re shit out of luck.

Mostly, though, littering behavior seems to be governed by a mixture of education and priorities. If you’re not aware of the link between pollution and the grave state
of our planet’s ecosystems, you’re more likely to throw your coffee cup in a storm drain. If you’re Harvard-educated and stay current on world news, but you hate
your job, your wife, your town and yourself, you’re more likely to flick your cigarette butt against a tree.

If you care about your community and understand that this planet is tied together by millions of communities just like yours, you’ll probably just keep your sandwich
wrapper in your hand until you eventually see a trash can.